Tartarus Press has a consciously old-fashioned, classic design style, which has slowly evolved over the years, but remains essentially the same. The original idea was to emulate the elegant books of the 1920s published by such august firms as Martin Secker. This seemed fitting for the Edwardian storytellers we were publishing at the time, but the unfussy, clear layout was also, in many ways, quite modern.
Back in 1994, just a few years after Tartarus had started publishing, I showed a copy of one of our early books, Ritual and Other Stories, to the late Father Brocard Sewell of the Aylesford Press. He had worked alongside Eric Gill, and had been involved in publishing all his life, and he offered some useful advice. For example, he gently explained that the Times New Roman font I was using was designed for newspapers, not books; as I didn’t have to pack text into narrow columns he suggested I should use a more elegant yet unfussy typeface. There were other specific recommendations, but the single most important thing he said was that great design should not be noticeable. “Clever” typography and design that in any way distracted from the text was not fit for purpose.
Seventeen years after that meeting we are still honing the design of our books, and hopefully much of it goes unnoticed. There is a dichotomy, however, when this philosophy of understatement comes up against the design of dustjackets…
Traditionally, dustjackets were no more than pieces of paper wrapped around a book so as to keep the cloth clean and undamaged while it was in transit between the bookseller and the purchaser’s bookshelves. It made sense to print the title of the book on the wrapper, and perhaps other useful information, but they were originally entirely unadorned and practical, and to be disposed of.  And then, at the beginning of the twentieth century, it was realised that an arresting image and a few lines of hyperbole could help sell the book. All of a sudden, an eye-catching design for a wrapper was de rigeur…
If, today, you walk into any bookshop (make the most of them, they are a dying breed), you are confronted by countless shelves of books all striving to catch your attention. So what makes for good dustjacket artwork now? It’s largely a matter of taste, of course, but I’ve often felt that even the greatest images and designs can lead the reader in a certain direction which is not necessarily appropriate to the text. And if the artwork is poor then it can actually dissuade someone from buying  the book. 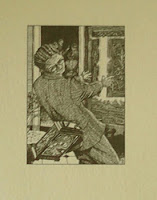 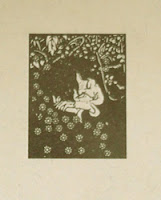 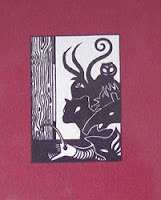 Clockwise from top left, illustrations by Peter Strasfeld, Jason Eckhardt, Steven Stapleton and Sidney Sime.
After we had published our first few of books, we bowed to the inevitability of printing an image on our jackets, establishing a house style with an appropriate but understated black-and-white vignette. We’ve been lucky enough to get permission to use images by Sidney Sime (The Hill of Dreams), Peter Strausfeld (Le Grand Meaulnes), Jason Eckhardt (Forever Azathoth), David Johnson (Guides to First Edition Prices and Gunter Weber’s Confession) and Steven Stapleton (The Collected Strange Stories of Robert Aickman). However, sometimes we’ve been really stuck for appropriate artwork, and I’ve had to draw it myself! 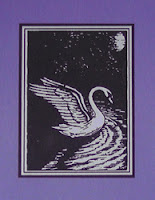 Clockwise from top left, images by R.B. Russell for Three Miles Up, The Collected Macabre Stories of L.P. Hartley, The Cheetah-Girl , and The Shapes in the Fire.
On a weekly basis we receive submissions from artists, but it is very, very rare that their work is appropriate to the books we publish. And then, at the end of 2009, we came across the artwork of Stephen Clark. He had been illustrating posters for a series of alternative music gigs in Leeds and his work was so beautiful and strange that we got in contact with him and he provided the artwork for Strange Tales III, then the paperback edition of Machen’s N. We also commissioned him to provide the powerful image for Sourdough by Angela Slatter. Stephen’s  work is now adorning our series of reprints by Robert Aickman.

What we like about Stephen’s artwork is that it is so suggestive, without quite being explicable; is curious, strange and twisted, yet quite beautiful. There is also something about it that is quiet, unassuming and confident.

Illustrations by Stephen Clark for Cold Hand in Mine, Dark Entries, Powers of Darkness and Sub Rosa.
at July 20, 2011 3 comments:

The Times They Are A-Changin’

In the last few weeks we’ve been learning how to create “e-books”, and now have a few titles available for download. There should be more available over the coming months, allowing for the constraints of rights and permissions. Please be assured, however, that there is no intention for Tartarus to move away from the publication of old-fashioned, traditionally-made “tree-books”, but it would be perverse of us not to explore the new technology and make great literature available to those who would rather read on their Kindle, ipad etc.


E-books are frustrating, and not just because the process of conversion is fiddly and time-consuming (we have updated our first attempts at e-book design as we have refined our skills.) When we design our physically-published books we take a great deal of time and effort to make sure that the font is just right and the proportions of the text, word-spacing, leading, margins etc are harmonious and pleasing to the eye. With e-books, however, all of this has to be stripped-out to make sure that the text will flow easily in a device where we have no control over the way it looks. Presenting classic supernatural fiction in the “arial” font, with bright blue hyperlinks for chapters, goes against the grain, but we tell ourselves that ultimately the text is the most important thing. We are not complete Luddites. However…

The one aspect of the new technology that does disturb us is that the nature of traditional book production and printing is changing as a result of the popular move to e-books. For the last few years our books have been printed and bound by Biddles in King’s Lynn and we have had a very good working relationship with them. Yesterday, however, they told us that they will be replacing their Litho presses with new ink-jet presses. They offered to send us samples, confident that the quality of this new, untested technology would be just as good as traditional lithographic printing. They hoped that we would be happy to accept this compromise, but then added that none of the paper we specify can be used. We would have to accept either staring-white, smooth paper, or very poor-quality high-acid cream paper.


And so, with regret, we start the search for new printers. We called Antony Rowe, their main competitors, who we have used in the past, and were told that they still have their Litho presses--at the moment. They admitted, however, that the days of long-runs are over and even Penguin print their books in very low-numbers because demand has dropped and they don’t want to pay warehousing costs. Mainstream, high-volume publishers are turning more and more to digital printing.If we decide to work with Antony Rowe, it may not be for long…

So, while we are not going to rail against the rise of e-books, what they are doing to the traditional print industry is potentially very sad. As Bob Dylan sang, “The times they are a-changin’”. 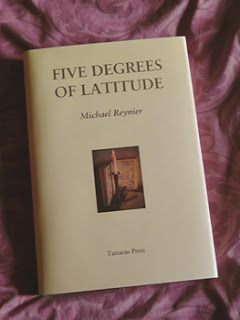 Today we officially publish Five Degrees of Latitude by Michael Reynier. This is a great collection of short stories by a first-time writer. His submission was one of many that have appeared in our inbox, but it was one that stood out from the rest…

We have an open submissions policy at Tartarus, and receive, on average, two manuscripts via email every day, which equates to over 700 per year. In the last twelve months we’ve accepted two submissions… We are very exacting and have high standards, but we really do want to publish more original fiction by contemporary authors. So why is the “hit-rate” for acceptances so low?

The first thing to say is that around half of all submissions are from authors who don’t realise that we only publish stories and novels in the strange/horror/supernatural genres. It is a surprisingly wide field, but some authors don’t seem to realise that it doesn’t include self-help books, autobiography, high fantasy, etc. It is a shame; a little research would’ve avoided us all wasting our time.

The other half have to be more seriously considered. From experience, it is fairly easy to tell from the first page whether or not a submission is going to be of interest to us. If it is poorly written, in a style that grates, or has specific elements that don’t work for us, a polite rejection will soon follow.  Those that are potentially of interest, perhaps a quarter of all submissions, require more careful reading...

What we are looking for are short story collections and novels that are well-written and original, entertaining and thoughtful, and which have that indefinable extra spark which makes them a really good read. ‘Well-written’ is a subjective concept, but the ability to tell a story in interesting, elegant prose should be the minimum requirement for any author. It is not about perfect grammar and punctuation (although that certainly helps!), but about clear communication, and contributes to making a book a page-turner every bit as much as plot and character.

Not many submissions manage to have everything we are looking for, but when they come along we are pleased to publish them, and share them with our customers. We’re sure that Michael Reynier’s Five Degrees of Latitude will satisfy those who have enjoyed previous Tartarus Press contemporary fiction.