It’s The End of the Book as We Know It

At the Edinburgh international book festival earlier this year Ewan Morrison suggested a bleak future for publishing. He was subsequently published in the Guardian, asking “Will books, as we know them, come to an end?” and answering his own question “Yes, absolutely, within 25 years the digital revolution will bring about the end of paper books.” He also states, “ebooks and e-publishing will mean the end of ‘the writer’ as a profession.”


He seems pretty sure of himself, and writes at great length. He argues that there has been a financial downturn in all of the traditional creative industries that have turned digital, because a culture has been created in which people no longer expect to pay for any “content”. This isn’t just due to piracy, but because so much “content” is offered for free, other “providers” have no option but to make their work available for nothing if they are to compete. 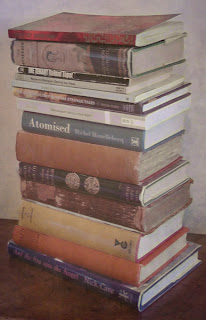 His argument is simple: if there is no money, no writer of any worth will continue to write, and why should they? He claims that “most ‘notable’ writers in the history of books were paid a living wage” and that in the last fifty years the system of publishers' advances has supported “notable” writers. Without the patronage of the traditional publishing industry there will be no great writers writing great books.

In Morrison’s apocalyptic future, traditional publishing houses will inevitably go out of business. Any writer foolish enough to directly e-publish will lose the support system of editors, proof-readers, publicity and promotion. They won’t even be able to sell their works online: charging for extra content, eking their work out in instalments or via crowd-funding are all, apparently, non-starters.

He says that within a decade or so the biggest "publishers" in the world will be Google, Amazon and Apple. He offers a horribly persuasive vision of the near future in which all artistic endeavours will inevitably be channelled through these digital behemoths, offered for free, paid for by advertising. And that advertising revenue, presumably, goes into the pockets of the behemoths and none will go to writers, musicians, film makers, artists, etc. I came away from reading the article imagining a world in which badly-written flash-fiction will supplant novels, and amateur Youtube clips will take the place of films.

But is he right? I don’t think so (to answer my own question!)

For a start there are figures published by Nielsen BookScan here in the UK stating that in 2001 there were 162,000,000 books sold in Britain. In 2011 it was up to 229,000,000. Despite discounting, overall revenues are also up, especially for fiction. That doesn’t look like an industry in decline.

Sales of books in 2011 are apparently slightly down compared to 2010, so is this the beginning of the end? Amazon.co.uk says that it is selling more Kindle books than hardcover books, but they admit that their sales of hardcover books continue to increase. Reports of the death of the physical book seem to have been premature, especially if we make allowances for the present economic climate.

And is there really a culture of freeloading as Morrison claims? As Lloyd Shepherd says in a very well argued Guardian article, music was pirated on a large scale for several years because there were no good alternatives if you wanted to download digital music. The success of iTunes shows that now a great way of legal downloading has been established, people use the service, and pay for it. And we should always beware of industries that tell us they lose sales through piracy; a good proportion of those piracies would never have been legal sales in a perfect world.

There will always be ludicrous claims from the doomsayers and the self-interested, just as there will often be something real at the root of some fears (in my opinion, the dominance of Amazon is one of the biggest potential threats to all the artistic industries.) But I have to admit that the one thing that really annoyed me about Morrison’s article was the claim that “most ‘notable’ writers in the history of books were paid a living wage” and that in the last fifty years the system of publishers' advances has supported notable writers. Anybody with any knowledge of literary history knows that many of the greatest works of literature were created by writers who were unappreciated by the literary establishment. It has always been the case, and probably always will be, that the best writers won’t give up writing just because a large, traditional publishing house might not give them a huge advance on royalties.

We have posted a short film on Youtube that should be of interest to those familiar with Tartarus Press, Mark Valentine, and some of the authors we have published over the years:

Last year the Halifax Ghost Story Festival at Dean Clough Gallery was spread, in a leisurely fashion, over three days, and we were pleased to be able to organise a thread on the Saturday afternoon with speakers and readings. The whole event was a great success but, sadly, could not be repeated in such an extravagant way this year. (Not only was it all a ridiculous amount of work for visionary organiser, Dee Grijak, but, in the current economic climate, external funding for such an enterprise is no longer available.) There was a re-think, and it was decided that Dean Clough would hold a day-long festival this year, and we at Tartarus were again delighted to be asked to have a hand in the event.
The festival started off with a reading of Arthur Machen's short story “Ritual” by actor and writer Reggie Oliver. Reggie brought the story to life very effectively, as you will see if you follow the link to our film. Many thanks to him for allowing us to make the video available.
“Ritual” was followed by a panel chaired by Mark Valentine, on which Gwilym Games, Reggie Oliver and myself discussed Machen’s life and work. The excuse, if one were needed, for the Machen theme was the publication of his stories in the Penguin Classic series, The White People and Other Weird Stories. It also allowed us to showcase a new short film of Machen’s story, “The Happy Children”, directed by Mark Goodall. A wonderfully atmospheric piece, beautifully narrated by Jon Preece, this black and white gem deserves to be better known. We were delighted that Mark was able to make it to Halifax to introduce his film, and answer questions from the audience afterwards.
After a break, the second panel of the afternoon, “Pushing the Boundaries of the Ghost Story”, was chaired by John Probert. This time the panellists were Mark Valentine, writer Nicholas Royle and psychiatrist Chris Maloney. They each chose authors to illustrate how writers have gone beyond the traditional conventions of the ghost story. Mark Valentine discussed the work of Walter de la Mare, Nick Royle the writing of Joel Lane, and Chris Maloney chose M. John Harrison. John Probert wrapped up the panel by mentioning films that push the boundaries, including “The Others” and “The Baby’s Room”. A number of attendees commented on the fact that the panel would have benefitted from a longer time-slot, but there was a schedule to follow.
We all then went down to the Viaduct Theatre, in the bowels of the Dean Clough complex. Dark, chilly, and with water running across the cobbles it was a wonderfully atmospheric venue to see a 1995 TV adaptation of Elizabeth Jane Howard's “Three Miles Up”. With a sympathetic back-story not in Howard’s original tale, it is a powerful and creepy film, with a great performance from Douglas Henshall.

(Incidentally, we launched We Are For the Dark by Elizabeth Jane Howard and Robert Aickman at the Festival. The collection serves not only as a manifesto for the Aickmanesque short story, but contains "Three Miles Up".)
Following on was an HTV adaptation of Robert Aickman's “The Hospice” (directed by Dominique Othenin-Girard). Filmed in the 1980s, it is already a period-piece, and has the relentless quality of nightmare, in spite (or because?) of the absurdity of the situation that poor stranded motorist Jack Shepherd finds himself in. The overheated lounge, after the impossibly large meal, and then sharing a bedroom with the delightfully pathetic Jonathan Cecil, all seems somehow very plausible. Dee Grijak hopes to be able to unearth further Aickman TV adaptations, and details will follow shortly of her petition which she hopes will help get them released (under the campaign name “The Attempted Rescue”).
The above trailer for Dark Entries contains foggy footage from an old vhs copy of "The Hospice.
Two contemporary films, “The Hairy Hands” (directed by Ashley Thorpe), and “An Urban Ghost Story” (directed by Geneviève Jolliffe), rounded off the festival, the latter of which appears to have been enjoyed by the brave souls who stayed until the end. Sadly, we had to miss it; like several others, we had a distance to travel home that evening…
We’d like to thank Dee Grijak for her vision and all of her work, not least in securing permissions and quality copies of “Three Miles Up” and “The Hospice”, and Vic Allen, Artistic Director at Dean Clough. Many thanks also to the various panellists, and to Mark Goodall for sharing his film “The Happy Children”. There were approximately seventy people attending the festival this year. If only we hadn’t packed so much into the day we might have had a chance to talk to many friends who came along! Hopefully we can repeat this year’s success in 2012.
at November 14, 2011 No comments:

Elizabeth Jane Howard and We Are for The Dark 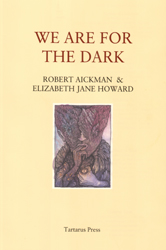 Email ThisBlogThis!Share to TwitterShare to FacebookShare to Pinterest
Labels: "Robert Aickman" "Elizabeth Jane Howard" "We Are for the Dark"

The Decadent Genius of Théophile Gautier 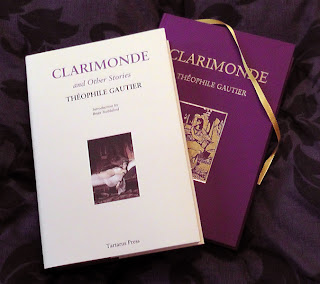