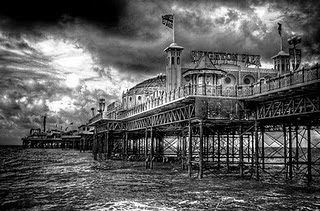 On the 30th September the doors of the Royal Albion Hotel in Brighton will open for Fantasycon 2011, the annual convention of the British Fantasy Society. Tartarus Press will have a presence all weekend with our books in the dealers’ room, and we’ll be launching Reggie Oliver’s new collection of short stories, Mrs Midnight, on Friday at 5:30pm. Fantasycon will be the usual mix of readings, panels, signings etc, and is a chance to meet all kinds of weird and wonderful people in a friendly and relaxed atmosphere.


We’ve been going to Fantasycon for four or five years now. We were initially put off attending because the name Fantasycon tended to suggest unicorns, elves, etc. However, alongside traditional Fantasy, the British Fantasy Society promotes just about every other genre (Horror, SF, slipstream etc), and that which crosses and defies genres. In fact, as “genre” becomes more mainstream and the mainstream embraces “genre”, it all makes for a very professional event. Fantasycon lacks all the embarrassment and nerdiness that we had expected. Very few people dress up as elves …


But, if anything, Fantasycon could do, perhaps, with more people attending in costume, and more nerds. Just about everyone there is a writer, an artist, an editor or a publisher. There are TV and film people, even musicians, but very few ordinary fans, which is a little weird. Everyone is friendly and approachable. This year there’ll be the chance to meet Brian Aldiss, Gwyneth Jones, and John Ajvide Lindqvist (author of Let the Right One In), amongst others. There will be established, familiar names like Ramsey Campbell, and newer writers like Adam Neville, Sarah Pinborough and Gary McMahon.
So why aren’t more ordinary fans taking the opportunity to meet such luminaries in the bar, buy them drinks, get their books signed, and simply hang out? Last year, for example, I spent a very pleasant hour talking to Brian Clemens, who was happy to tell me all about his creation of The Avengers TV series, and he explained the truth behind the sexual chemistry between Steed and Mrs Peel, as well as chatting about The Professionals, Danger Man, and other great classic television series.
What Fantasycon lacks are the people who are just happy to read books, graphic novels, and watch films, and who would like to meet the creators of their favourites. The World Horror Convention in Brighton last year was very similar to Fantasycon; James Herbert, Neil Gaiman and Tanith Lee all attended, but nobody in Brighton knew it was happening. I was staying with friends who are ardent lovers of literature, and have helped run Brighton's “City Reads” festival, and they had no idea that the convention was in town. It’ll be the same with Fantasycon this year; nobody outside our little closed world will even be aware that it is happening.
Dare I suggest that the British Fantasy Society needs new dynamic, forward-thinking publicity people who will promote Fantasycon to all those people who love fantasy. There are hundreds of thousands of them, potentially, even if they are predominantly just reading  best-selling novels and watching block-busting films. The BFS membership know about Fantasycon, as do people who frequent the odd internet discussion forum, but where else is it promoted? The Harrogate Crime Writing Festival gets international media coverage, but Fantasycon won’t even get a mention in Brighton's Evening Argus!
Go here for more details! Attending membership for the whole weekend is £65 (£60 to British Fantasy Society members). A day membership (for the Saturday only) is £40.


Come along and meet a great bunch of people, and you don't have to be in the trade! 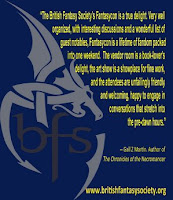 The aesthetical detective of the supernatural known as The Connoisseur has had his adventures chronicled a number of times by Mark Valentine, initially in In Violet Veils, published by Tartarus Press in 1999. This volume contained nine stories, and amongst glowing reviews was this one by Peter Cannon in All Hallows: 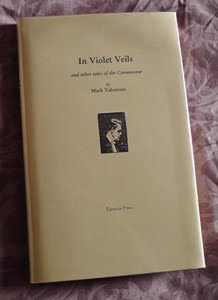 “This is a very curious and wonderful book: curious because a contemporary author dares to write in a style and mode fashionable a century ago; wonderful because he does so with such apparent ease, perfectly matching sometimes purple but always precise prose with outré subject matter. In this slim, elegantly produced volume ... nine exquisite episodes...”

It was immediately apparent that The Connoisseur was the latest embodiment of a fine lineage of detectives, including M.P. Shiel’s Prince Zaleski and Arthur Machen’s Mr Dyson, and more distantly Algernon Blackwood’s Dr John Silence and William Hope Hodgson’s Carnacki, the Ghost Finder. 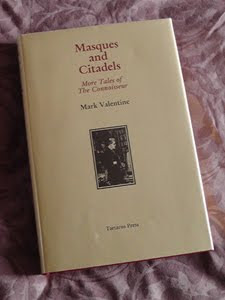 The Connoisseur, however, is very much his own man, as was shown in the second volume of his adventures, Masques and Citadels, published by Tartarus in 2003. Eight of the adventures related in this volume were written by Mark Valentine alone, and two more were collaborations with John Howard (the author of the recent The Silver Voices, amongst others).

Once again the reviews were very good: "Mark Valentine is surely one of the best writers working in the genre," wrote David Longhorn in Supernatural Tales. However, there was one voice of discontent; a reviewer in Prism wrote: "It is possible to be too subtle and 'recondite'." The adventures of The Connoisseur are surely for those readers who like their writing to be quietly effective, and for an author to credit them with a certain intelligence and appreciation of style. 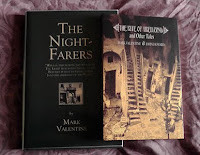 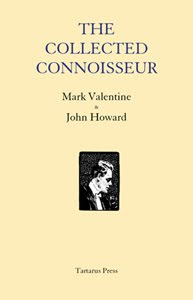 The Connoisseur is often seen appreciating beautiful, craft-made objects, and we like to think that he admired the books in which his exploits have been previously published. When the stories were collected last year as a Tartarus paperback, The Collected Connoisseur, we hoped that he would have at least understood the practicality of the format! But what would he think of them being published as an e-book?

For those who like the convenience of Kindle and other electronic reading devices, The Collected Connoisseur is now available either direct from our website, or via Amazon:

The Collected Connoisseur for Kindle at amazon.co.uk

The Collected Connoisseur for Kindle at amazon.com 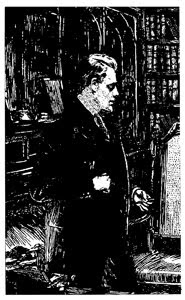 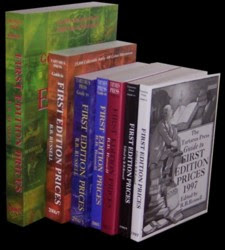 An undoubted casualty of the internet has been the old-fashioned reference book. Many have an innate distrust of reference material online, especially those with “user-generated content” such as Wikipedia, but there is a wealth of information out there today which is surprisingly useful. Much of it is also free. There is undoubtedly mistaken and misleading information on the net, but we mustn’t forget that this was also the case with printed reference books, which often perpetuated errors through successive editions, and were just as prone to bias.

Perhaps standards of scholarship, editing and proof-reading were once higher, but at least the internet allows for immediate revisions of mistakes when they are noted, and there is certainly no excuse for information being out of date. Arguments about elitism in the past, and the present democratisation of information, suggest that things are no better or worse – just different.

As the compiler of the Guide to First Edition Prices for the last fifteen years, I have to admit that the internet has become a more and more useful tool. The basis of the Guide is the 700 bibliographies I have compiled, and to be able to check titles and dates with not only the British Library and Library of Congress websites, but also with sites created by fans and enthusiasts, has been invaluable. And when it comes to the values of books, bookseller websites offer a vast amount of (often conflicting) information. It takes a lot of experience to know which booksellers have prices and descriptions that can be trusted. 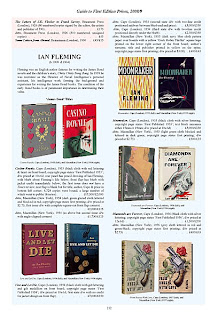 The 2008/9 edition of the Guide to First Edition Prices was our magnum opus, printed in full colour on heavy art paper (a few copies of this coffee table book are still available). The most recent edition (the eighth) has been revised and enlarged again, but it has not been printed in colour. Sales remain steady, but the influence of the internet, coupled with the problem of selling through traditional booksellers like Waterstones, mean that the heyday of the lavish reference book has probably passed.

We are not downhearted, though! In an attempt to embrace the modern world we are now making the Guide to First Edition Prices available as an ebook. You can buy it as a mobi file for Kindle here, or as an epub file direct from us here. It contains values for over 50,000 titles and is ludicrously cheap for the vast amount of research it contains. 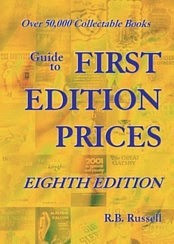 And what’s more, it is still available for real book lovers as an oversized paperback for only £19.95 direct from us, or through any good bookshop. 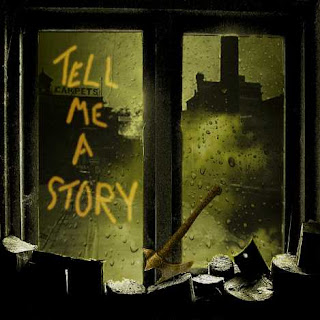 Preparations for the alt.-ghost story festival continue apace. We’re very pleased to be able to include in the programme little-known films of Robert Aickman’s The Hospice and Elizabeth Jane Howard’s Three Miles Up.Tickets £10 for the whole day and ordering details will follow shortly.

The provisional programme is as follows (subject to fine-tuning)

Break for drinks and snacks

5.50pm - 6.10 pm
General discussion about the festival and the programme for next year.


Additionally, we also hope to launch the publication of a new edition of We Are for the Dark by Robert Aickman and Elizabeth Jane Howard.

More details will be posted as they are confirmed....

We look forward to seeing as many of you as possible in Halifax!
at September 09, 2011 2 comments: