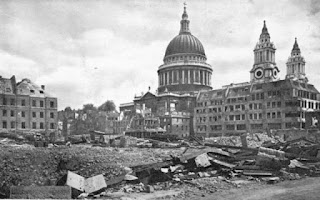 Robert Aickman reported that he had been a Conscientious Objector during the Second World War, claiming that he had made such a good argument before a Tribunal that he was exempted from any kind of war work. Friends like Elizabeth Jane Howard took this at face value and have repeated the assertion in their memoirs and recollections. I have to admit that, personally, I had always been a little sceptical, not least because Aickman’s claims about himself in his autobiographies and elsewhere are not always to be relied upon.

The main reason to doubt his word is that in his unpublished philosophical tome Panacea, Aickman wrote positively about the First World War. Many historians look back on ‘The Great War’ as a political escapade that had unforeseen consequences (none foresaw the huge loss of life over so many years). In Panacea, Aickman did not give any impression of being a pacifist (as far as he was concerned, the First War had been an aid to progress, and the death toll doesn’t seem to have been an issue for him). His main objection to the Second World War, expressed in letters to friends, was that it was ‘unnecessary’, even ‘silly’, and he appears to have believed that negotiation with Hitler would have made him go away. Most of Aickman's recorded comments were made with the benefit of hindsight. 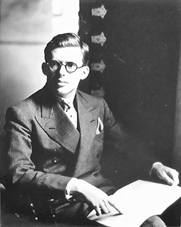 I was also sceptical that Aickman could have been exempted from all war service by a Conscientious Objection Tribunal. In London, only 2% of all COs were given complete exemption, and most of those argued from a position of strong Christian conviction. Panacea shows that Aickman had an interest in religion, but no religious beliefs.

With an apparent lack of proof either way (most CO Tribunal records have been lost or destroyed) I discussed a number of possibilities with Aickman’s surviving friends (none of whom remember him expressing Pacifist or religious convictions). One possibility was that he had been made to do something dull and clerical, or even demeaning (in his estimation). Another possibility was that he had been sent to prison for refusing to help the war effort (although this would have been only for a few weeks, at most.) His various hints that he had talked to psychologists or psychiatrists suggested that he may have even been considered psychologically unfit. One friend considered that he may have done secret war work that he could not reveal (the CO claim being a cover story), but I thought that it would have been uncharacteristic of Aickman not to have later alluded to such a role.

The mystery was solved almost by accident, but as seems appropriate, it resulted in yet another mystery. Rosalie and I were visiting the Aickman collection at the British Library during Covid restrictions and we were only permitted to see a limited number of items. We had been perplexed by the description of one of these as Aickman’s application for a position in the Civil Service. This seemed uncharacteristic of Aickman, and piqued our interest. It was, in fact, a mis-description of his Conscientious Objection papers, including his statement to the Tribunal, which he had kept. . . . 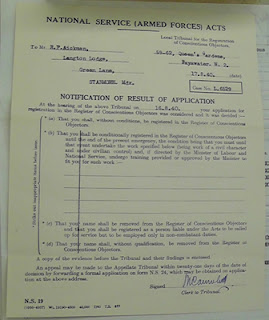 . . . Robert had indeed registered as a CO, and had been given a full exemption, exactly as he claimed. Quite how you view the arguments he makes in his Statement depends on your own attitude towards both conscientious objection, and how Aickman presented him­self to the Tribunal. The statement is included as an Appendix to the newly published biography, so the reader can make up their own mind.

All photos, unless otherwise stated, are copyright Estate of Robert Aickman/British Library/R.B. Russell, and are not to be reproduced without permission and acknowledgement.
at February 17, 2022