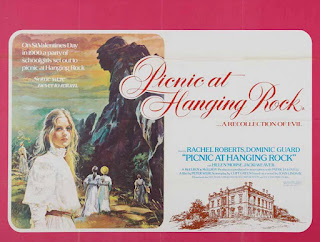 On the 29th November 1976, Robert Aickman wrote to Ramsey Campbell:

Very many thanks for recommending Picnic at Hanging Rock. Despite a certain naivete in the direction, it is a very good film indeed, and, I should say, in important respects unique. It is indeed also a quite remarkable simulacrum of my methods: not only my type of theme (I have never seen any other film like it), but also in the proportions maintained between the mysterious and the familiar. Who, please, is Joan Lindsay, who wrote the book? I have never heard of her, and should like to read it. I take it that the film is based on something that actually happened? I supposed that it was, but was then made to wonder by the comprehensiveness of the intimation at the end that no character in it was based on any real person, living or dead. Perhaps as a critic you have received documentation that answers this question? In fact, I should be most interested to see any documentation you may have. It is a most extraordinary film: most like me are the unexplained accessories, the lady who had lost her skirt, and the girl who makes the unexplained return.

Picnic at Hanging Rock, made in 1975 in Australia, was directed by Peter Weir. It was adapted, quite faithfully, from the 1967 novel of the same name by Joan Lindsay.

It is difficult not to offer a major ‘spoiler’ for the film, but I hope this won’t put anyone off seeing it, if they haven’t already. On Valentine’s Day 1900, the students at a private school for girls in Victoria, Australia, go with their teachers to picnic at a local geological formation known as Hanging Rock. (It is a real place.) Later, with permission, four girls explore the rock, but, near the summit, next to a monolith, they mysteriously fall asleep. When they awaken, all but one, Edith, move further into the rock formation. Edith runs away in terror. When the party returns to the school, three girls and one teacher are missing. Much later, one of the missing girls, Irma, is recovered, but she cannot explain what happened to her, or to her friends and teacher. 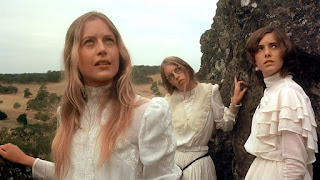 Still from the 1975 film Picnic at Hanging Rock
The film has been long regarded as a classic, although there have always been dissenters who are annoyed that the fate of three characters is never explained. The critic Roger Ebert called it ‘a film of haunting mystery and buried sexual hysteria’. It is beautifully and languorously filmed, and the sexual undertones are handled with admirable restraint.

Aickman may sound a little self-important in saying that the film is a simulacrum of his methods and that its devices are like his, but the similarities are remarkable, especially the ‘unexplained accessories’. Peter Weir succeeds in creating an Aickmanesque film not least because of the several mysteries that he refuses to resolve. 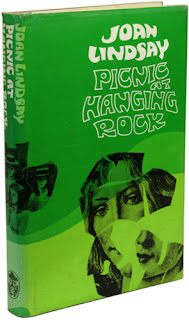 First edition of Picnic at Hanging Rock, F.W. Cheshire, Melbourne,1967
The film is very faithful to the book by Joan Lindsay, who deserves credit for writing an excellent novel. It is highly unlikely that she was aware of Aickman’s stories when she wrote Picnic at Hanging Rock, which was first published in 1967 in Australia. (It was reprinted by Penguin in the UK in 1975.) The idea of leaving the mystery unresolved was, in fact, not Lindsay’s own. It would appear that the original draft of the book included a final chapter that explained everything. At the suggestion of her editor, Sandra Forbes, Lindsay removed the final chapter, which, of course, only led to some readers wanting to know what it contained. Perhaps unwisely, ‘Chapter Eighteen’, as it is known, was published posthumously in 1987 as The Secret of Hanging Rock. Admirers of both the book and the film are advised not to read it! 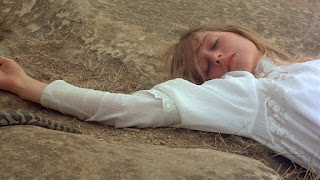 Still from the 1975 film Picnic at Hanging Rock
As for Aickman’s question as to whether it was based on a real event, the answer appears to be no, even though the novel is written in the form of a true story, with a pseudo-historical prologue and epilogue. The setting and several towns mentioned exist, and the school is based on a real one (located elsewhere), but there is no record of any such events occurring. Aickman may well have admired Joan Lindsay’s refusal in interviews to either confirm or deny whether it was based on fact. In a 1974 interview she said, ‘It was written as a mystery and it remains a mystery.’

In this spirit, it is suggested that apart from The Secret of Hanging Rock, admirers might also want to keep away from The Murders at Hanging Rock, 1980, a book of hypothetical solutions by Yvonne Rousseau.

You can order Robert Aickman: An Attempted Biography now.

All photos, unless otherwise stated, are copyright Estate of Robert Aickman/British Library/R.B. Russell, and are not to be reproduced without permission and acknowledgement.
at April 07, 2022