Robert Aickman at the Barbican 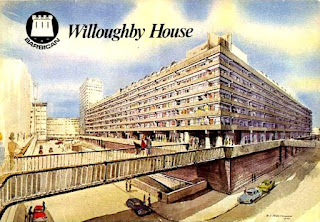 Robert Aickman moved into 530 Willoughby House in the central part of the Barbican (one of the larger flats), in May 1973. The residential complex of 2,000 flats, maisonettes, and houses was still being built in central London, on land flattened by bombing during the Second World War. It is a massive exercise in Brutalist architecture and appears, in many respects, an unlikely choice for a man with not just a passion for the past, but a profound dislike for most aspects of the present day. This kind of innovative new housing was greeted with almost universal approval when first built (it often replaced appalling slum housing), and the many subsequent social problems associated with such devel­opments can usually be attributed to a lack of ongoing invest­ment. The Barbican, however, is still considered desirable because it has been well maintained, no doubt because it has remained rental housing for the middle and upper-middle-classes.

Aickman had to move not only his furniture, but also his books, his waterways archive, his literary and personal papers, his very large collection of theatre programmes (3,000 were accepted by the Victoria and Albert Museum after his death), and a huge reference archive of newspaper and magazine clippings. He employed Harrods to move everything for him, although he never forgave them for losing a knob from an item of furniture. His new accommodation was on two floors, overlooking the lake, but he hated it from the start. Moving to the Barbican was originally the idea of his friend Felix Pearson, who admitted to David Bolton ‘that it turned out to be an unfortu­nate choice’. Robert Aickman lived there for only three years, and his main complaint was that noise from the nearby telephone exchange distracted him from his writing.

Aickman tried to make the best of his time at Willoughby House. Visitors remember it being furnished like a stately home, with old-fashioned furniture and books. Ramsey Cambell wrote:

[Robert] was now living in the Barbican, an apartment com­plex whose functional exterior concealed, in Robert’s case, a home from an altogether more genteel age.

Under the headline ‘A chill wind in the Barbican’, Carol Dix interviewed Aickman for The Guardian in 1976 and entered into what she considered the spirit of the meeting by likening the Barbican to a castle from a Gothic novel. She wrote:

The modern, square box of a Barbican apartment has been skilfully arranged to look like the wing of a minor country house. His writing studio is lined with old books, editions of ghost stories, and velvet curtains where mysterious draughts can blow. 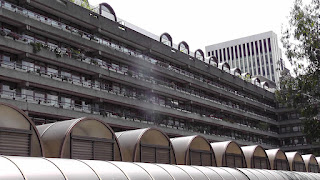 Rosalie Parker and I visited The Barbican in June 2021. Access is for residents only, but we fell into conversation with one of them, and he kindly let us into the building. He was interested to know about Aickman, and in turn told us that his flat had been previously owned by the actor Roger Moore. There is something quite soulless about the various corridors, despite the fact that they are carpeted. The uniformity makes it a rather Kafkaesque. 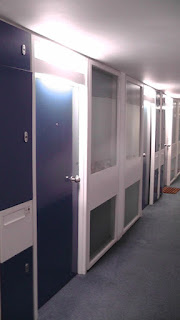 It does seem to be a very unlikely environment for Robert Aickman. His next flat, at Gledhow Gardens, was smaller, colder, and up several flights of stairs, but as a period property it better suited his taste and style. 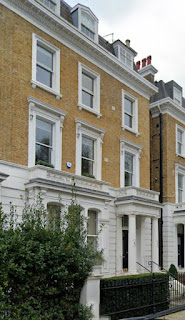 All photos, unless otherwise stated, are copyright Estate of Robert Aickman/British Library/R.B. Russell, and are not to be reproduced without permission and acknowledgement.
at May 13, 2022