A Book of Ryhmes (sic) by Charlotte Brontë, the last Brontë miniature manuscript book in private hands, has been bought by the Friends of the National Libraries, and on Monday 1st August it was handed over to the Brontë Society at the Brontë Parsonage Museum in Haworth, Yorkshire. The miniature manuscript, containing ten poems (measuring just 3.8 x 2.5 inches) finally came home to the house in which it was originally composed, hand written and stitched together by Charlotte Brontë, aged thirteen. The poems have never been transcribed or published. 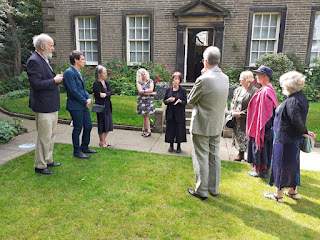 Guests on the lawn at the Brontë Parsonage Museum Haworth, 1st August 2022

It was a great honour for us to be among a small number of guests at the Parsonage, where Henry Wessells (on behalf of James Cummins Booksellers of Manhattan, US, in association with Maggs Bros. Ltd, London) gave the miniature book to Ann Dinsdale, Principal Curator of the Brontë Parsonage Museum. From today (Thursday), it will be exhibited to the public in the Museum. 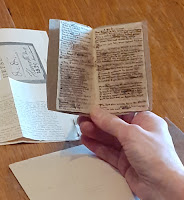 A Book of Ryhmes by Charlotte Brontë

The miniature Brontë books are fascinating. After Branwell Brontё was given a dozen toy soldiers by his father, Patrick, all the Brontë children began to create stories and poems, many of which were written down, about Glass Town and Angria. Later, Emily and Anne composed stories about the Kingdom of Gondal. The stories were written in tiny facsimiles of books, a list of which is included in Elizabeth Gaskell’s The Life of Charlotte Brontë. One of these, Charlotte’s A Book of Ryhmes, disappeared from view after it was sold at auction in New York in 1916 for $520.

One very early owner of A Book of Ryhmes was a ‘Mr Maggs’, who bought it for £34 before selling it on. It was therefore appropriate that Ed Maggs, current proprietor of Maggs Bros should have helped facilitate the return of the book to Howarth Parsonage. Ed pointed out to us on Monday that the media are all too inclined to talk about ‘lost’ manuscripts in cases such as this. As he said, most supposedly lost books and manuscripts are simply a part of somebody’s collection where they are recognised and treasured.

From today A Book of Ryhmes will be on public view, thanks to the Friends of the National Libraries who raised 1.25 million dollars to buy it. In terms of size, it is the most expensive book that we have ever seen in the flesh! We are immensely grateful to our friend Henry Wessells and to Ann Dinsdale at the Brontë Parsonage Museum for a magical afternoon and evening in Haworth. We shared the once-in-a-lifetime experience with Mark and Jo Valentine. 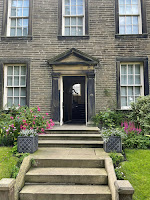 There are plans afoot to transcribe A Book of Ryhmes and to eventually publish the poems. You can keep up with progress by following the Brontë Society and the Brontë Parsonage Museum here: https://www.bronte.org.uk/.